On my fourth day in Los Angeles, I bought myself a bicycle. Before that, I’d borrowed the one my AirBnB host, Albert, keeps for the guests, but it was the sort of deathtrap people who know nothing about bicycles buy for $30 off Craigslist and congratulate themselves for being such savvy consumers. The rear brakes didn’t work, along with most of the gears, and the front wheel wobbled worryingly between the two forks. It was heavy as a sledgehammer, and so old there wasn’t an allen key socket on the whole thing, never mind a quick release.

A little research and $145 later, I got my hands on a white fixie with red wheels and bullhorn handlebars, much like my ride back home. LA has turned out to be a hillier city than I reckoned on, but the two mile sprint from my house to the Huntington is pleasantly level.

LA, as everyone knows, is built for the automobile, but this far I’ve been pleased with the cycling provision in Pasadena. After years in Britain duking it out for priority with Chelsea tractors – or actual tractors – in lanes originally designed for medieval haywains, it’s surprisingly relaxing to be somewhere that actually gives you space. Some of the roads even have a bike lane that isn’t a little patch of red paint in the gutter with five cars parked in it, but a whole extra lane between the traffic and the kerb. You can take bikes on trains and buses, you can ride on the sidewalk and no-one gives a damn, you can work up a good head of speed on the long straight boulevards and, of course, you can turn right on a red light. For me, at least, it’s a great alternative to hiring a car and having to ease my way onto one of those scary scary freeways.

In other news it was raining this Sunday in Los Angeles. Rain! In California! Who knew?

Apparently LA hasn’t seen this kind of cloudburst in years. Before the rain it was easily as warm as an English summer out here, and now in spite of the constant sunshine there’s a definite chill in the air. Mine host downstairs has switched on his heating, but I’m calling on my reservoirs of student grit and doing my reading and writing wrapped up in duvets.

While I’m spending three months away from my girlfriend, I have decided to fill the some of thetime by trying out wildly experimental facial hair. This Friday I lopped off the moustache and went down to a chin beard. I’m not sure whether I look like a Quaker or a 70’s Marvel villain – certainly nothing like Lincoln – but I kind of like it. I think I’ll try out mutton chops sometime in March. 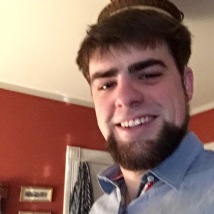 Next week I’ll write you something about the Huntington Library, and the photos will be gorgeous.