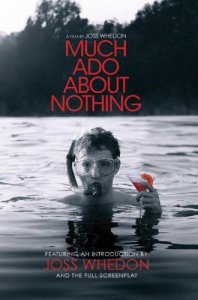 I had been secretly dreading this play. It’s not that I don’t like Much Ado About Nothing, it’s just that of all Shakespeare’s plays, I find it loses the most on the page. Without the live charisma and sexual tension that real performers can bring to Benedick and Beatrice, I get bogged down in footnotes explaining various obscure Renaissance puns – and while there’s some fun to be had in discovering how many lewd innuendos the learned Shakespearean scholar can discover, there’s nothing that kills humour quite so much as having it dissected, analysed and attributed, with references to various learned journals and scholarly works.

I began daydreaming instead of the last time I’d seen it in the cinema, with a beautiful French girl on a hot summer’s afternoon in York…

Ooh! I thought to myself suddenly. I wonder if there’s a screenplay available!

A quick search confirmed that there was a paperback edition of the screenplay of Much Ado About Nothing, a film by Joss Whedon, available for under a tenner. Not only that, but the film itself was available on Netflix. Score!

Much Ado is the tale of two romances, neither of which run smooth. Claudio and Hero have been making eyes at each other for a while, but Benedick and Beatrice cordially detest each other, and exchange verbal barbs each time they meet. Don Pedro organises Claudio’s marriage with Hero and her father, Leonato, and to while away the time until the wedding, composes a scheme to bring Benedick and Beatrice together by making each believe the other is madly in love with them. In the meantime, Pedro’s melancholy brother Don John hates to see a happy ending, and is making plans with his subordinates, Conrad and Borachio, to separate Claudio and Hero. His first plan is to allege to Claudio that Don Pedro is in love with Hero himself; after this fails, he comes up with a more ambitious plan. He arranges for Borachio to seduce Hero’s maid, Margaret, while Don Pedro and Claudio, looking on from a distance, are convinced it’s Hero they’re seeing.

This leads to one of the most gut-wrenching wedding scenes ever written, where Claudio basically walks her up the the altar and then calls her a prostitute. Hero, not unnaturally, faints dead away, and Leonato, Beatrice and Benedick come up with a plan to pretend she’s dead until after Don John’s minions have confessed their treachery and Claudio has shown himself properly repentant. By then, Benedick and Beatrice have discovered the nature of the trick that’s been played upon them – but so inseparable have they grown from one another in the meantime that they agree to marry also, and the whole thing concludes in one of those happy endings that make Don John spit.

Thus far in the project, this is the farthest I’ve wandered away from the actual text of Shakespeare. The director mentions in the introduction that he’s cut it down by about a third, though I’d be hard put to identify any particular scene or passage that got the chop. What’s most striking is the sudden change in texture. This is an example of Shakespeare’s usual terse scene setting, which is merely a scene number and a list of the characters onstage.

Enter Leonato Gouernour of Messina, Innogen his wife, Hero his daughter, and Beatrice his Neece, with a messenger.

Leonato.
I learne in this Letter, that Don Peter of Arragon, comes this night to Messina.

Joss Whedon’s screenplay takes a whole page to get to this point, in the course of which we’ve had a precredit sequence that completely alters our understanding of Benedick and Beatrice’s relationship by showing that they had a one night stand before the movie begins; then an establishing shot of black sedans rolling up the street towards Leonato’s estate. Then, only then, the opening scene, laid out in the clear, terse style of the shooting script.

The kitchen is abustle with people preparing food and elaborate punches, among the Beatrice (a few years older than we saw before) and HERO, her cousin, both working but neither clearly members of the household staff (who wear aprons). Beatrice wields a cutting knife, slicing oranges for a sangria.

LEONATO enters with Balthus, his ever-present AIDE. Leonato reads from an iphone…

I learn in this letter that Don Pedro of Aragon comes this day to Messina.

And for viewers of the movie, there’s a second surprise. Leonato – Clark Gregg from all the Marvel movies – speaks with an American accent! For those used to the high theatrical English of the Royal Shakespeare Company it’s a very strange moment – but it’s a tribute to Amy Acker’s confident performance as Beatrice that by the end of the scene, it feels entirely natural.

Back to the screenplay. It’s very much a working document, rough around the edges but not without a certain charm. Whedon can’t seem to decide whether to print the rare blank verse sections of the play as verse or prose, resulting in some very odd typography. Sometimes he will let the dialogue continue for pages without an intervention, and when he’s describing the visually spectacular party scene, the result is hardly literary:

A bartender serves drinks. Claudio is surrounded by young men urging him to down a drink, frat-boy style…

People dive in, play about. Some with undies and shirts instead of suits, most with drinks.

On a trapeze, twin sisters perform an intricate, sensuous act…

A couple sneaks down past the back gate with amorous intent.

Excepting possibly the coy use of ‘amorous intent’, none of this language owes anything to Shakespeare – but there is something to admire in its terseness, its easy translation into the visual, and how unfazed it is by proximity to Shakespeare’s deathless verse and prose. There’s something also to be admired in the simplicity of Whedon’s solutions to complex plot problems – his notion that all the characters are simply roaring drunk the whole time certainly has something to say for itself. Another good notion is that Borachio’s behaviour – first scheming to slander Hero, then confessing and repenting all on markedly little provocation – is due to his being in love with Hero himself. This is very clear in the screenplay, but I hadn’t noticed it in the film – partly due to the fact that the actor playing Borachio appears to have only one facial expression.

This is far from the case with Nathan Fillion as Dogberry, who takes up a buffoonish role that offers very slender comic pickings indeed, and makes it genuinely funny. Douglas Adams, who remarks somewhere that there is nothing than seeing a certain type of old-school English actor trying valiantly to ham it up as Dogberry, would surely have approved.

Hard as it is to separate the screenplay and the movie – and I’ve barely tried – there’s a lot to love in both. After seeing so many English productions, it makes a pleasant change to watch one so thoroughly American – and not one whit ashamed about being so. Not to mention how pleasant it is to relieve that sunny afternoon in York, the entertaining few hours in the shade of the cinema, and the stroll through the cool evening streets thereafter…

One thought on “A Year in Shakespeare: Much Ado About Nothing”