My first academic paper, delivered at a conference at Dove Cottage in Grasmere, set a high standard for atmospheric locales. When I received a call for papers for a conference taking place at Isambard Kingdom Brunel’s SS Great Britain in Bristol, I knew I had to go. The subject, Crossing the Line: Ritual and Superstition at Sea didn’t quite fit with my PhD thesis on Milton’s Eighteenth Century Influence, but I had some old research lying around from my BA dissertation that fitted the bill.

I swiftly concocted an abstract for a paper entitled Edgar Allan Poe on Ice: Fictionalising Arctic Masque and Ritual in Dan Simmons’ The Terror and was delighted to have it accepted. After an all too brief period of revamping, rewriting and further researching, I took the train down to Bristol on a sunny Thursday morning. 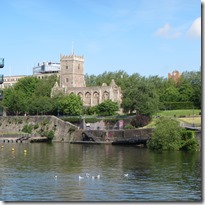 A brief confession – I always get lost in Bristol. It’s a city of sharp corners, sudden ups and downs, suspiciously similar brick buildings and awkward waterways. Matters are usually not helped by a pint or two of something tasting innocuously of apple juice and the fact that the last train back to Cardiff, in a quirk of the schedules, leaves at 01:37 in the morning. This time, however, I managed to thwart my natural haplessness by simply following the river Avon, after a brief confusion over whether I should go upstream or down, and arrived at the SS Great Britain in tolerably good time. The conference organiser, Laurence Publicover, gave me the hearty welcome due to the only speaker not personally shepherded over from Bristol University.

We were in the Viridor Theatre, part of the Brunel Institute, which looks out onto the port side of the SS Great Britain; a wonderful place to take tea and make friends. The conference began with four papers: Jimmy Packham presented a paper entitled “The aweful ceremonies of the Equator”: Reaching the Line in the Nineteenth Century which impressed me by the grand literary-historical scope of its narration, drawing in Darwin’s Voyage of the Beagle, The Rime of the Ancient Mariner and Mark Twain’s diaries. Claire Connor’s paper on “Crossing the Line” The SS Great Britain and Mid-Voyage Violence was a more detailed look at the crossing the line ceremony in the history of the ship’s voyages, and introduced us to various

passenger diaries and the tantalising mystery of the gummed-together page in the ship’s log. Tasmin Badcoe followed us with “All the devils are here”: Crossing  Unholy Waters in the Early Modern Imagination which began appropriately with the opening of The Tempest and took us through some wonderfully far-out renaissance texts. Then it was my turn. I apologised in advance for the truly sailor-like language of my quotations, but secretly I rather enjoyed that, and couldn’t resist unleashing my am-dram side while quoting the marvellously resonant final lines of Edgar Allan Poe’s The Masque of the Red Death. I even managed to handle the questions that followed with easy fluency instead of my usual stammering and fluffing, and stepped out of the spotlight happily conscious that my somewhat thrown-together paper had succeeded better than I’d hoped.

After lunch we had a round table discussion with the shellbacks, as those who have crossed the line and been initiated by Neptune are subsequently called. One older man recalled a serious hazing that involved being locked into a pigsty, lathered over in a revolting mixture of paint and tar and shaved with a blunt razor, while another in a modern yachting team recalled a kind of food fight where they all threw mashed up Weetabix over each other. The highlight was definitely the naval serviceman who produced the instructions and script for the crossing the line ceremony from the appropriate service manual – ‘because in the Navy there’s a manual for everything.’ Finally the curators of the Brunel Institute presented their own research, which showed, intriguingly enough, that the scope and rowdiness of the crossing the line ceremony was steadily scaled down during the lifetime of Captain John Gray of the SS Great Britain, though they were unable to say quite why.

There was time remaining after the conference to explore the SS Great Britain and its surrounding exhibitions, but not, unfortunately, to climb the mainmast yard. Sunset found me bathing my feet in the cool waters of the Avon while sharing a few bottles of rosé with Bristol’s Perspectives from the Sea research group, whose brainchild this conference had been. The waters before us, once thronged with ships of the empire sailing to and from every coastline on Earth were filled with paddleboarders and sculling teams and sailboats going about. It was a perfect evening. By dint of fast walking and diligent inquiry, I even found my way back to the station in time to catch the 11 o’clock train home – and that’s unheard of.