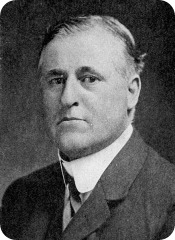 Time has not done any favours for Sir William Watson. Time, in fact, has not served any of the patriotic verse writers of the early twentieth century particularly well, but Rudyard Kipling gets credit for hidden depths as well as sympathy for losing his son in World War One, and Henry Newbolt (‘Play up! Play up! And play the game!’) still gets quoted for British Imperial Poetry at its most jingoistic. The poetry of Sir William Watson, by contrast, was neither subtle or ambivalent enough to stand on its own merits, nor tasteless enough for notoriety. Born in 1858, he proved to be a staunch Victorian and literary conservative and could not or would not assimilate the increasingly influential modernist movement into his poetry. By the time of his death in 1935, his entry in the Oxford Dictionary of National Biography records that he was almost totally forgotten, and many were surprised that he had survived so long into the new century. He is now out of print, rarely anthologised and few even among academic specialists spare him a thought from day to day.

Such is literary fame. Some very few writers, like Shakespeare or Austen, may write volumes, and find that future generations will prize every word of them, and treasure every signature and trace they leave in the world. Others write volumes, and find of their hundreds of thousands of words a couple of poems survive, or a single book. Others may only contribute a single line or a phrase that bobs like a lonely spar on the surface of an ocean, into whose forgotten depths the edifice it was once part of has plunged without a trace. Some, like Sir William Watson, are almost completely forgotten – yet if I had to nominate a single line of his poetry to survive the cataclysm, I’d opt for the first line of his Hymn to the Sea:

Lover whose vehement kisses on lips irresponsive are squandered

This is a verse form called a Homeric, or Dactylic, Hexameter, consisting of a metrical foot of one stressed and two unstressed syllables, repeated six times. It is an English version of the Ancient Greek metre in which the Iliad and Odyssey were written, and one that proved to be bizarrely popular throughout the nineteenth century. The flaws of the English hexameter are obvious to anyone who tries to read or to write a such a poem – such as Coleridge, who complained:

All my hexameters fly, like stags pursued by the staghounds,
Breathless and panting, and ready to drop, yet flying still onwards,
I would full fain pull in my hard-mouthed runaway hunter ;
But our English Spondeans are clumsy yet impotent curb-reins ;
And so to make him go slowly, no way left have I but to lame him.

In English, it is a forced, unnatural metre, turgid, droningly repetitive, almost impossible to rhyme (though Swinburne made a good shot at it) and which owes its nineteenth century popularity entirely to the novelty and difficulty of the metre, and the cultural cachet of its Homeric associations. The most famous and readable works in it are Henry Wadsworth Longfellow’s Evangeline, and Robert Southey’s notorious A Vision of Judgement, which includes lines like:

Thus as I stood, the bell which awhile from its warning had rested,
Sent forth its note again, toll, toll, thro’ the silence of evening.

And which inspired a brilliant parody by Byron, in the far more expressive form of ottava rima.

Having found the dactyllic hexameter completely unsuited to the English language, it is surprising to find that in Sir William Watson’s line, it almost works. The poem as a whole quickly gets repetitive, but in the musical phrase

Lover whose vehement kisses on lips irresponsive are squandered

I can find what the English hexameter has universally lacked: the marriage of sound and sense. In the whispering of the repeated sibilance; in the crash of the opening stresses and the melancholy, long, withdrawing roar of the weaker syllables, there is something evocative of the very motion of the sea, the ‘tremulous cadence slow’ that haunts Arnold’s ‘Dover Beach’ and Tennyson’s ‘Passing the Bar’. Counterpointed by the strikingly original image of the sea imparting her passionate kisses to the land, it makes this single dactylic hexameter as close to perfect as the English language can make it. It is a line well worth remembering, and one which I do remember, every time I go down to the seashore.