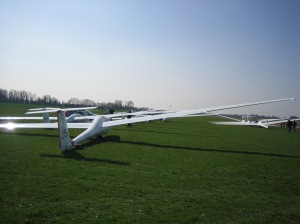 A belated spring has finally reached Britain. The trees are beginning to come into leaf, a couple of months after the first flowers poked their heads above ground, only to be buried deep in snow and frozen into submission. Down at Pocklington airfield, everyone is out of doors and a grand fleet of gliders is lined up in two orderly queues, for winch launches and aerotows respectively. The first of the spring thermals have arrived, and no-one wants to miss a moment of flying time.

Thermals are columns of hot air rising from the earth below, which can be hijacked by gliders and used to gain height. The lack of any warm air at all during the winter months is what makes gliding relatively neglected for half a year, when all anyone can do is descend as slowly as possible. In spring, when the nights are cold and the days are warm, and the temperature differential is at its strongest, the thermals are at their fiercest. It is possible to climb thousands of feet in just a few minutes.

I’ve been gliding all winter through, and coming out to Pocklington once a fortnight on average. I’ve been up a dozen times, but even so my total flight time is still just under an hour. An average winter flight lasts about 5-7 minutes, and even if you’re lucky and get 3 flights in a day, it’s still not a lot of time. Often rain, or adverse winds, or ice on the wing, will scupper your chances of getting into the air.

By contrast, my first flight this spring lasted 38 minutes, and took me to heights of 3500 feet. It was terrifying – but then I find everything terrifying while I’m flying a glider. It’s part of the reason I go. In this case, my head knew, abstractedly, that the higher we are the safer we are, that we have more room to manoeuvre, more opportunities to find another thermal,even – God help us – more time to bail out should anything go catastrophically wrong. My stomach, however, has only just got used to seeing Pocklington from a thousand feet up, and is really unused to this new perspective. It doesn’t help that climbing in a thermal involves spiralling inside a column of hot air, and maintaining that spiral in despite of all the efforts of wind and turbulence to force you out of it. It requires a tight look out, careful handling of the controls, and a strong stomach, particularly on rough days. By the time I land, I am noticeably green around the gills.

Yet there’s fun to be had on the ground too. Once we huddled in the tea bus, hunkered over our mugs and shivering, while mist poured from our mouth and nostrils with each exhalation. Now everyone is sat out around a table, telling the tall tales of lightning strikes and crash landings that are so much a part of the gliding experience. All around us, the birds are back in force. Since almost all our aircraft are silent, and the one strip of tarmac we have dates back to World War Two and is harder to land on than the grass, there’s little to scare them away. The swallows are all over the place, and popular with everyone except the man who’s job it is to keep them out of the aircraft hanger, where they have an irritating habit of nesting inside the gliders. The moment one entrance is stopped up, they find another. It’s a never ending task. Swifts and skylarks are to be seen in profusion, and I was once halfway through my circuit when I looked to my right and found two buzzards flying a few feet off my wing. Of course, I couldn’t let that go by without writing a poem.

Birdwatching on the Airfield.

The swallows nest in gliders in the spring.
Leave one uncovered for a week and when
You check inside the canopy or wing,
You’ll find them stowed away there in their den,
Awaiting launch by aerotow or cable,
As if they thought to fly up like the wren
Upon the eagle’s back, in Aesop’s fable.
This spring, there’s many kinds of birds around,
I’d name them all for you, if I were able,
But of the ones whose proper names I’ve found,
I like the skylark best for its ambition.
Because, like us, they’re born upon the ground
But will not be content with their condition.
To see them struggling skywards in full song
Fills we with – well, a kind of recognition
Of my desires in them. Oh, prove me wrong
If you’ve a mind to, but I think we share
A certain glee in flight, now Winter’s gone.
It wasn’t long ago I saw a pair
Of buzzards in a thermal spiralling
Beside my glider on the rising air,
And as we soared together, wing to wing,
I thought: to us, with human speech’s gift
There’s mystery in all they do or sing,
But sympathy as well. Why, take the swift:
Would it play all the games it does in flight
With drag and thrust and gravity and lift
If with us it shared not the same delight
In ease and speed and silentness and height?
Advertisement