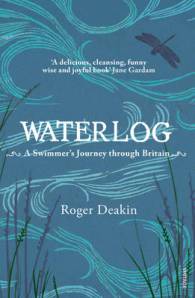 Looking again through Roger Deakin‘s classic wild swimming manifesto, Waterlog, I realised that while there’s an awful lot of swimming for pleasure, or adventure, or exploration, he never really covers jumping in the lake as an alternative to jumping in the tub. Quite often, after the really long cold swims, he has a piping hot bath awaiting him when he gets out – and actually, it’s hard to blame him for that. But this got me thinking of the two times in my life where swimming has replaced washing, and what that felt like.

It was my first time in America, and we were paying a visit to some family friends called the Butterworths. They had visited England when my father was a kid, but apart from the prosaic business of having children and letting their hair grow white, they didn’t seem to have grown much older in the meantime. Which suited me fine, seeing that I was nine at the time.

This was their summer holiday, and the whole extended family were living in log cabins they’d built for themselves, on the edge of Squam Lake. Electricity really ran out at the fridge, which was in a little hut of its own a few hundred yards up the road. It limped on as far as the main cabin, where it powered a single bulb – but that was it. No modern plumbing, no TV or radio, no hot water. You woke up, went for a swim, then had breakfast. I was nine, and it was paradise. I’d never been around people with their own canoes before, and suddenly it was Swallows and Amazons come to life. It was a perfect, innocent, boys’ own adventure story.

Case in point RE the innocence – it was accepted etiquette for those living on the opposite side of the lake to swim across and greet new arrivals, rather than going to all the trouble of walking round. Our nearest neighbours happened to be a pair of Swedish girls, and as they rose dripping from the water to introduce themselves, I couldn’t work out for the life of me why my father was so impressed, and my mother so irate with him. It would continue to be a mystery to me for a good couple of years.

We pretty much lived in the water – it was always cool, but it was never a shock to get into, and even when we were mucking around in canoes, we were always looking for an excuse to capsize or fall overboard. Being in the water was simply much more fun than being on it -and that’s an opinion I hold to this day.

I’ve forgotten most of it now, and envy my sister’s memory, who can ever recall the pattern on the sides of the canoe, and the path through the woods to every hut. For me, the whole thing has receded into the golden mists of boyhood, and I can hardly believe I ever lived a life that much like something out of a book.

Swimming didn’t replaced bathing again until a recent trip to the Peak District with a walking group from Cardiff. Our bunkhouse was close on the River Derwent, and while we were searching for a footpath that the river, then in spate, had completely overflowed, we discovered a rather convenient bathing hole by the side of an old mill. Upstream the river was shallow and tame – downstream it thundered down a long stretch of rapids out of sight, and in the middle there was a long deep pool on the edge of the weir where a man could get a few strokes in before beaching himself on the gravel.

It was nothing like Squam, where the lake was deep and the swimming was limitless. Unlike the gentle American waters, the river was cold enough to take my breath away, even in summer. But it was a beautiful river, between the moorhens and the willows on one side and the foam, spray and thunder on the other. When our hastily re-routed walk was over, I returned to wash off the dust – and returned again, morning and evening, for the next four days, sometimes with friends and sometimes alone. It was astonishing how it would alter my mood. I’d walk down tired and snappish and grimy, and return revitalized, cheerful, and awake. Everyone I swam with commented on it. For four days I neither soaped, shampooed or showered, but plunged in the river and emerged feeling like a king. But then the rain came down, the temperature dropped a few degrees, and I made a cowardly retreat to the hot water of the bunkhouse bathrooms. Yet just as I was finishing up, my hand found the temperature dial and gave it a sudden, violent, anticlockwise twist, and I gasped and spluttered beneath an ice-cold torrent for thirty excruciating seconds before I got out. That too has become a habit.