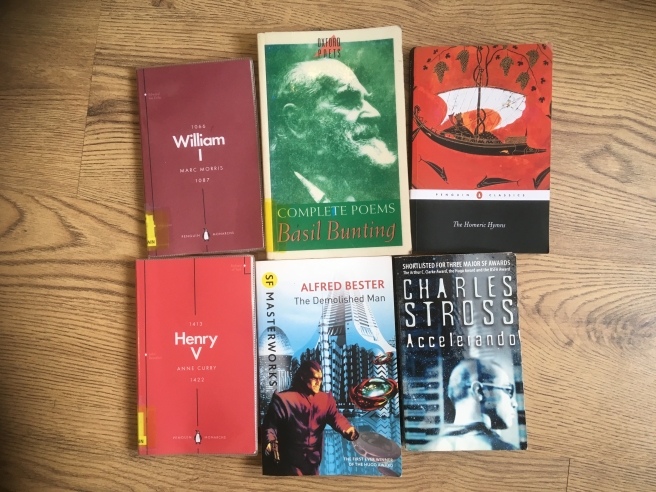 This was my first month teaching in the secondary school system, and if I still managed to read eleven books, it’s only down to the fact that many of them are slim Penguin biographies of under a hundred pages. I’m looking forward to breaking into something substantial over October half term.

Nothing dates faster than the future, and this early work by one of my favourite writers already seems a touch dated. The opening chapters are cyberpunk to the point of self-parody, but each of the chapters time-jumps a decade or more, and halfway through the book most of the inner solar system is already being broken down for computational substrate, while an interstellar mission has discovered an alien wormhole network out in the Oort cloud. It’s a bit like watching The Expanse on fast forward. Exhausting at times–Stross does love to ping the ideas about–but never dull.

Worth reading as the earliest source for Greek myths–the abduction of Prosperine, for example, which my girlfriend maintains is the cover for an awesome Goth romance, but as told here is more of a mother-daughter story. The longer ones–to Apollo, Demeter, Aphrodite and especially Hermes–are most interesting, since most of the others are short and unremarkable, and Cashford doesn’t do these many favours by centre-spacing them, in a bid to make them look poetic by the standard of Instagram. Hermes is far and away the highlight, since the hymn to him as a wildly precocious young trickster God is a total tonal leap apart from the rest of material. It’s funny, sarky, and full of life, and I may try my hand at writing my own slang version.

The Demolished Man, by Alfred Bester

Another dated future, this one of the 1950s. The solar system’s colonised and a sizable proportion of the human race have developed telepathy, but computers are still specialised devices the size of rooms. This one’s a crime proceedural, rather than a mystery. Ben Reich, head of the Monarch corporation, plots the perfect murder, and then Lincoln Powell, the telepathic Chief of Police, has to catch him out. The Freudian twist is that Reich’s motives aren’t what he assumes. Would make an interesting companion to a Philip K. Dick novel.

George I: The Lucky King, by Tim Blanning

Blanning admits immediately that the first Hanoverian King isn’t the most interesting in the dynasty, but the advantage of these sub-100 page Penguin Monarchs is that you can learn a good deal about the lesser lights without having to swallow a doorstopper. The biography of Henry VIII I read in this series felt overstuffed–poor Catherine Howard was married and killed off in the course of a paragraph–but here we get an easy tour of the reign’s highlights: Handel’s water music, the South Sea Bubble, Walpole scheming, ructions with the Prince of Wales, and endless European wars handled with admirable clarity and lightness of touch. Blanning has a good eye for anecdotes, and never lets the Electorate of Hanover slip out of focus while he’s narrating the affairs of England. Overall, rather a lucky commission.

The cover of this one presents James II as a looming, bewigged panto villain, so it’s a surprise how handsome he is in his portraits, particularly in his younger days as Duke of York and Lord Admiral, with a strong chin, good posture, and none of his father’s wispy facial hair. Wormsley likes to focus on this period, the colourful Restoration days when Pepys, Evelyn and Dryden were writing, and we’re halfway through the book before James comes to the throne. The question Wormsley focusses on is how it all went so wrong so fast, and while this threatens to enmesh him in tangles of historiography, he pulls through and gives a vivid portrait of a tactless, stubborn and imperious monarch who kept blundering and blundering until he finally had to flee the country. Plus, I have a soft spot for any historian still willing to quote Macaulay with enjoyment.

Edward II: The Terrors of Kingship, by Christopher Given-Wilson

Another failed King, this one famously a) gay and b) executed by red-hot poker up the jacksie, though both these received facts are questioned in this book. His struggles with the barons are rather hard going at times, since there are a lot of Mortimers, Pembrokes and Gloucesters to keep track off. Given-Wilson does manage to give a character to Thomas, 2nd Earl of Lancaster, and keeps us clued in to Robert the Bruce’s nation building and the dizzy throne-swapping in France. The life is briskly run through in four equal chapters, plus a welcome epilogue on legacy, which touches on a failed sainthood bid, Marlowe’s history play, and his adoption as a gay icon.

William the Conqueror (or the Bastard, as he was known in his own times) is one of those Kings who exist as dates and battles rather than personalities. Aside from sketchy representations on his coinage and the Bayeux Tapestry, there isn’t even a portrait of him, so while Morris fills in the build-up and aftermath of the famous battle in Hastings well enough, the material can sometimes be a little dry. Two new facts leapt out at me: firstly, William was England’s first abolitionist, abolishing chattel slavery among the Anglo-Saxons, something that sits very oddly alongside his reputation as a brutal overlord. Secondly, it looks like the Domesday Book wasn’t a tax record after all, but a land register: a way to establish property ownership, alongside the principle that all land was held from the King.

I’d read through Briggflats a couple of times, and always put it aside as a poem needing more study and annotation that I could spare. So the sheer readability of this collection came as a surprise to me. Bunting’s other long poems, or sonatas as he calls them, are relatively accessible, filled with a pugnacious vitality, and very much of their eras. The 30s stuff, filled with meditations of castration and sterility, is influenced by Eliot’s The Waste Land without being slavishly imitative, and Bunting, never without as sense of humour, can be entertainingly brusque with Eliot’s elegaic postures. The short poems, or Odes, are a marvellous assortment. I was delighted by the pair of emigrant ballads smuggled in alongside the verse libre, and sniggered at the appendix of limericks.

A neatly structured pocket biography, but I got to the end feeling like Shakespeare had covered all the major points. It was good to hear about some of the behind the scenes events–troubles with Lollard heresy, Henry IV’s probable syphilis and relations between King and parliament–but nothing here challenged the narrative shape and characterisation set by the history plays.

Pericles and Fabius Maximus, by Plutarch

Not the most obvious pairing in the Parallel Lives, Pericles being the politician’s politician, and F.M. the general’s general. I find the latter more sympathetic, in the stoic tradition of generalship that extends to Grant and Patton, fighting off Hannibal and public opinion simultaneously. With Pericles in the golden age of Athens, you can see why the rest of Greece hated them, and how much effort it took Pericles to keep the wheels on while he lived. Still, it was worth it to leave us the Parthenon.

My first time reading through this Dickens novel, as part of the project of reading all the school set texts I should probably have read by this stage. George Bernard Shaw does right to call it his most compactly perfect novel; Our Mutual Friend is still my favourite, but that’s an enormous, baggy, novel full of tour-de-force chapters, while this is one complete, compelling tale with nothing superfluous in it.