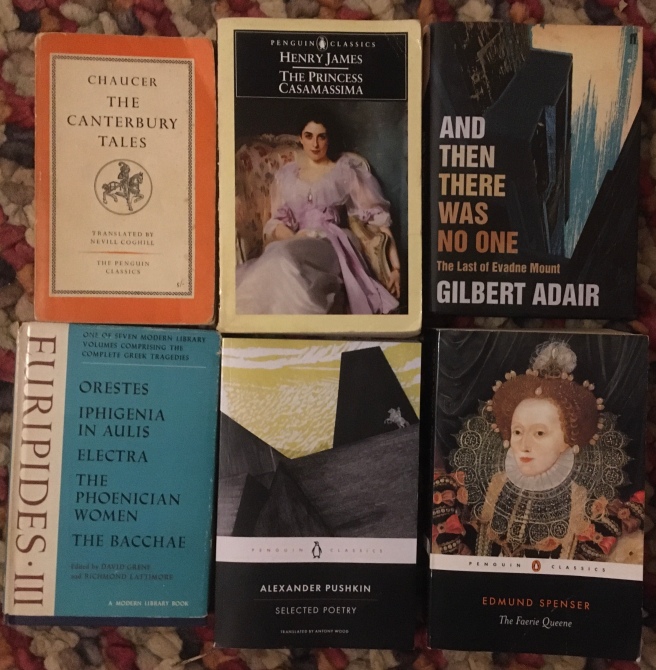 Oh, the month of May! The not-so-merry lockdown month of May! Between getting hooked on videogames that let you wander through Renaissance cities and watching TV programmes I probably shouldn’t be watching in a pandemic (Chernobyl, The Report), I got through ten books. It’s not much for a month where all I did was bide my time, but one of them was The Canterbury Tales, so I’m pleased with that.

And Then There Was No-One, by Gilbert Adair

The last and least of the Evadne Mount trilogy where the author goes full po-mo and narrates the tale in his own person. It’s got all the tics of such novels–silly names, literary gossip, a fixation with Nabokov–all elbowing out the murder, which the author shows very little interest in. The final 20 pages are engagingly madcap and surreal, but didn’t merit the trudge of the previous 250.

The last and perhaps the best play by Euripides–a departure in so many ways, from the wild spectacle of the mid-play earthquake to the gory dismemberment of the King at the end. I don’t think the chorus is ever so well used as it is here. For a late work, the innovation seen here is astonishing.

Re-read. A comfort book, still astonishingly vivid in its scenes and characters. Who wouldn’t give their right arm to have written the apple barrel scene, or a glorious monster like Hands or Silver? It marks for me the point where I left the safety of Enid Blyton behind and entered a more vivid, savage, dangerous world.

Book V of The Faerie Queene, by Edmund Spenser.

My history with this monolith of English verse is chequered. I’ve read Book I (twice), Book II, bounced of Books III and VI, and enjoyed the Mutabilitie Cantos. I think Book I is easiest because the allegory follows the character arc of the Redcrosse Knight–he falls into error, then into despair, returns to a state of grace, and fights a dragon. It’s a basic 3-act structure. The other knights don’t have this–Guyon, knight of Temperance, doesn’t slob out in the middle cantos of Book II. The closest Artegall, knight of Justice, gets is a deeply weird section where he yields to a female knight through chivalry and is made to put on women’s clothing and do some weaving. There’s recognisable allegorical episodes–a version of the Judgement of Solomon, as well as the trial of Mary, Queen of Scots and War with Spain, but it feels rather disconnected. One thing it did inspire me to do was return to some scholarly articles in search of further illumination–which I read, for the first time in a while, with real enjoyment.

The Wedding of Sir Gaweyn and Dame Ragnell, in Middle English Verse Romances

The worst poem I’ve read in quite some time. It’s one of the sources for the Wife of Bath’s Tale in the Canterbury Tales, which is why I looked it up, but it’s so clunky and metrically incompetent as to be almost painful. Chaucer’s own spoof romance, Sir Thopas, looks like a masterpiece compared to this. For specialists only.

Only of the few series where I will listen to an audiobook without reading the hard copy. This one gave me my PC Peter Grant fix and expanded the world building, as foreign agents attempt to get their hands on a magical Babbage engine. It’s hampered in the early chapters by flashbacks which are not nearly so interesting as the present-day narrative, but exploring a Silicon roundabout tech firm gives Aaronovitch a cast of geeky eccentric and opportunities for endless Hitchhikers references–both of which I appreciated.

Jeeves and the King of Clubs, by Ben Schott

I’m rather fond of the pseudo-Wodeshousiana, because they usually end up as fascinating cross-breeds rather than straight imitations. Sebastian Faulks’s Jeeves and the Wedding Bells stole a bunch of tricks from Upstairs Downstairs, while this one takes its cue from the spy novel. Wit sparkles from every page, and the endnotes are an extra treat. Characterisation and description are on point, but Schott hasn’t been able to resist the temptation to over-egg, bean and crumpet the dramatis personae. Too many familiar characters are introduced, meaning the plot ends in a confusion of loose ends quite unlike Wodehouse’s elegant double bow.

The Canterbury Tales, by Geoffrey Chaucer, modernised by Nevill Coghill

I’ve always had a bit of cognitive dissonance when it comes to Chaucer. Everyone always talks of jolly old Dan Chaucer, heart of Merrie England, and the bits I’d read before included blood libels and honour killings. Reading it end to end, I got more of a sense of it as an anthology, each tale having a new narrator who’s unreliable in a whole new way. Began reading after watching Two Noble Kinsmen at the Globe. I looked into the play but struggled, so I switched to The Knight’s Tale, where upon the easy lope of Coghill’s modernised couplets swept me on through the whole thing.

I adore Pushkin, and this Penguin selected will sit beautifully beside Eugene Onegin and the Collected Prose. Wood is a skilful poet and a metrically ingenious translator. Some of the lyric verse feels a little straightened, but with the narrative verse and folk tales the translation is fluid and easy. Pushkin is a welcome reminder that great poetry needn’t be wholly serious. For my money, he’s greater than Byron.

The Princess Casamassima, by Henry James

It is perhaps fortunate that Henry James was to write so many short stories and novellas, as they provide accessible opportunities for the impatient and distracted modern-day reader to sample and appreciate his perspicacious, equivocal, delicately nuanced style; a style that sprawls across sentences of enormous length and paragraphs that stretch for three pages at a time. Whole novels in this vein can become rather wearisome, but after a long preface in his almost unintelligible late style, it is a relief to spring upon the relative sharpness and directness of the earlier James, and the book turns out to be gifted with many of the novelistic virtues: vivid characters, deftly sketched locations, conflict and co-operation. Above all, it has the charm of seeing James step outside of the aristocratic drawing room and attempt a sketch of low life in the mode of Zola or Gissing, for the book’s noble title conceals its preoccupation with revolutionary struggle among the London working class. I wearied of it several times in the reading, but on finishing I find these frustrations have melted away into a sublime satisfaction.