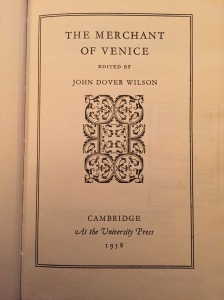 After struggling through Love’s Labours Lost, it was a relief to put the heavy collected edition back on the shelf and borrow a pocket edition of The Merchant of Venice from the university library. It’s part of a Cambridge Shakespeare series from 1958, and it’s small, squarish, a rather pleasant faded blue colour, and blessedly lightweight. It’s not for every pocket – it would be hard to slip this inflexible hardback into the back pocket of my jeans, for example – but it turns out to slip very nicely into the large square pockets of my favourite denim jacket, where it swiftly found a place among the cycling gloves, notebooks and mint humbugs. As it was quick access, I read several scenes in the queue at the supermarket. The editor apparently has a quixotic fondness for preserving archaic spellings such as ‘piring’ for ‘peering’, ‘moe’ for ‘more’ and ‘roth’ for ‘ruth’, but this difficulty is easily solved by turning to the helpful glossary.

Aside from the edition, however, there’s little about this play that’s lightweight. Antonio, the merchant of Venice himself, begins the play in a state of apparently causeless melancholy. If we assume he is both gay and in love with his straight friend Bassanio, much about the play that was mysterious now becomes readily fathomable. But that’s just my theory.

Bassanio wants money in order to woo the beautiful Portia, and though Antonio’s assets are currently all invested in shipping, he agrees to borrow money on credit to give to Bassanio. However, this was the Renaissance, where Christians were forbidden from practicing the sin of usury (i.e. earning a profit on interest). So Antonio must borrow from Shylock the Jew, towards whose race he has the usual unedifying prejudices. Shylock, who looks on Antonio with equal dislike, agrees to lend him the money on no interest at all, provided he puts up a pound of his own flesh as forfeit upon non-payment – for what use would that be to anyone?

Once he has the money, Bassanio soon succeeds in wooing the beautiful, witty and brilliant Portia. That’s hardly surprising in a Shakespearean comedy. The real drama is when Shylock, incensed by the way Bassanio’s friend Lorenzo has seduced his daughter, demands his pound of flesh of the Doge of Venice after Antonio fails to make repayments.

Like Measure for Measure, it’s a problem play where the ending leaves us with questions still to be answered. The portrayal of anti-Semitism is unflinching – Shylock concludes the play forcibly converted to Christianity – and some scenes are certainly uncomfortable. Shakespeare gives Bassanio and the play’s heroes all the figures, rhetoric and fine language of courtly gentlemen, but no-one could accuse him of not giving Shylock a voice. The Jew’s finest speech begins with the kind of inspirational language familiar from nineteenth century abolitionist speeches, then doubles back down a dark path indeed:

The legal expert called in by the court to settle Shylock’s demand for his pound of flesh turns out to be Portia in disguise, and though she gets some of the most beautiful and eloquent language in the play:

The quality of mercy is not strained,
It droppeth as the gentle rain from heaven
Upon the place beneath. It is twice blessed:
It blesseth him that gives, and him that takes.

Yet when Shylock will not show that mercy, she avails herself of a legal quibble that wouldn’t hold up a moment in any proper court of law, and has him harassed and taunted from the stage. Unlike its great predecessorChristopher Marlowe’s The Jew of Malta, where the anti-hero Barabas is an entertainingly diabolical rogue capable of poisoning whole convents of nuns to get his own way, and who dies after accidentally falling into one of his own death-traps, The Merchant of Venice evokes a surprising and persistent sympathy with its sullen, stubborn and covetous adversary. Long after the final page is turned, or the curtain falls, one might find oneself pondering whether the characters with the fine, elaborate speeches, the fancy clothes, the riches and the sex appeal, might just be the villains of the piece after all.