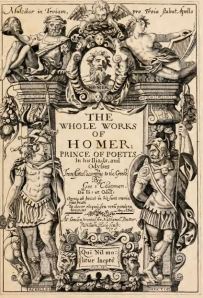 One evening in 1816, a minor poet named Charles Cowden Clarke invited another minor poet friend of his to spend a few hours reading a new antiquarian book he’d recently purchased: an outdated Elizabethan translation of Homer’s Iliad and Odyssey. The translator was George Chapman, a man who, even in the Renaissance, boasted of being too obscure for the common reader. It was not a night out that seemed initially promising: but as it happened, Clarke’s minor poet friend was John Keats, and the sonnet he found on his breakfast table next morning commemorating their evenings reading is likely to last as long as the English language – and a good deal longer.

It’s a beautiful, resonant image that has now become part of the common cultural currency, but modern reader of Chapman’s Homer, when faced with the same passages that inspired and electrified Keats, will probably experience something more like William Herschel’s original sensation of squinting down a large glass tube at a faint, blurry object he initially mistook for a comet.

In Keats’s day, Chapman’s translations were long out of print and hard to get a hold of, displaced and superseded by the trim, correct, neo-Augustan translations of Alexander Pope. Today, you can buy a cheap paperback edition for a couple of quid from Wordsworth Classics, a publishing company with a knack for getting a hold of the oldest, creakiest translations of any work of world literature. Their texts are often a century or so out of copyright, but by reaching back five hundred years to Chapman’s Odyssey and Iliad they excelled themselves.

Yet why should you read the Elizabethan version when there are excellent modern versions by Robert Fagles, D. C. H. Rieu and Robert Fitzgerald, doubtless for similar prices should you find the right second-hand bookshop? Is there anything remaining of that spark that electrified Keats?

Well, if you take it from the beginning and try to read it all through, it’s undeniably a tricky read. Chapman’s Iliad begins in magisterial form:
Achilles baneful wrath resound, O Goddess, that imposed
Infinite sorrows on the Greeks, and many brave souls los’d
From breasts heroic; sent them far to that invisible cave
That no light comforts; and their limbs to dogs and vultures gave:
To all which Jove’s will gave effect; from whom first strife begun
Betwixt Atrides, king of men, and Thetis’ godlike son.
Thereafter, it’s far too easy to become bogged down in the ghastly ingenuity required to force Homer’s catalogue of Grecian ships and captains into rhyme and metre, and in the intentionally confused syntax that is used to reflect the mayhem of the battlefield. The Odyssey is an easier read, and its episodic adventures are much more palatable than the continuous war of attrition the Iliad chronicles. It’s hardly surprising the imagery of the Keats sonnet draws heavily on the former while hardly featuring the latter. Still, a better bet might be to read one of the modern translators mentioned above, or start where Joyce started, with Charles Lamb’s The Adventures of Ulysses, to gain an idea of the plot, where the good bits are, and which bits you can afford to skip. It may feel like cheating, but skipping to the most dramatic episodes is probably the best way to enjoy the Odyssey and the Iliad – and probably Joyce’s own masterwork, too.

Things are complicated in The Odyssey too: Odysseus is referred to throughout by his Roman name of Ulysses, except where Chapman decides the metre or rhyme require he be called Ithacus (man from Ithaca) or Laertiades (son of Laerties), confusing matters somewhat. Things get even more complicated when he starts calling Odysseus’ son Telemachus as ‘Ulissides’.

Chapman’s freewheeling couplets are a delightful experience and an obvious inspiration for Keats’s own loose couplets in his long poem Endymion, but Chapman does occasionally come out with doggerel like:
But his decrees,
That holds the earth in with his nimble knees,
Stand to Ulysses longings so extreme,
For taking from the god-foe Polypheme
His only eye – a Cylop, that excell’d
All other Cylcops…

The god with the nimble knees is Poseidon, by the way – not one of his most renowned characteristics. (Fitzgerald translates ‘Only the god who laps the land in water.) Then again, those of us inured to the rigours of Shakespeare, Chaucer and Spenser will have little difficulty ingesting Chapman’s archaic language, and our reward is the experience of reading a unique version of the Odyssey with none of the neoclassical coolness of Pope, the plain novelistic narration of D.C.H. Rieu, or the beautiful, spare modern verse of Fagles or Fitzgerald. It’s the kind of tale Odysseus’s crewmen might have told themselves, if any of them beside the hero had endured being eaten alive by the Lestrygonians, drowned in the whirlpool Charybdis, or waking with a bit of a start and falling off Circe’s roof (way to go, Elphenor)! It’s a delight to read aloud, a rollicking, freewheeling, anarchic collection of adventures with plenty of tall stories thrown in and plenty of swagger. It’s hard not to love Chapman for the moments where the Anglo-Saxon vernacular breaks through in ways no modern translator would dare. Most dramatic is this passage, in which Odysseus finally reveals his true identity to the suitors who have been wooing his wife while feasting and drinking at his expense, and exacts a bloody revenge upon them all.
The upper rags that wise Ulysses wore
Cast off, he rusheth to the great hall door
With bow and quiver full of shafts, which down
He pour’d before his feet, and thus made known
His true state to the wooers: ‘This strife thus
Hath harmless been decided; now for us
There rests another mark, more hard to hit,
And such as never man before hath smit;
Whose full point likewise my hands shall assay
And try if Phoebus will give me his day.’
He said, and off his bitter arrow thrust
Right at Antinous, that struck him just
As he was lifting up the bowl, to show
That ‘twixt the cup and lip much ill may grow.

But for a sample of Chapman’s verse at its most intense and characteristic, it is hard to fault the passage which Cowden Clarke tells us Keats was most struck by. It is in Book Five, where Odysseus has been shipwrecked and tossed in a storm for days, at the mercy of Poseidon’s wrath. Finally, spent and all but drowned, he makes landfall on Phyrigia.
Then forth he came, his both knees falt’ring, both
His strong hands hanging down, and all with froth
His cheeks and nostrils flowing, voice and breath
Spent to all use, and down he sunk to death.
The sea had soaked his heart through; all his veins
His toils had rack’d t’a labouring woman’s pains.
Dead weary was he.