In the last year and a half of my PhD, I’ve discovered the Visiting Fellowship – a means by which generous subsidies allow scholars to travel to new and exciting libraries, to research fascinating material neglected and long overlooked, and write like they’ve rarely written before. The only thing that excites me so much as a new library is a new place to explore, and my applications have largely been smiled upon. I spent October 2015 at Chawton House, a woman’s studies research library in a small, perfectly-formed country house that used to belong to Jane Austen’s brother, Edward Austen-Knight. Now, I’m spending the first months of 2016 studying at the Huntington Library in Los Angeles, on a palatial estate dating back to a point when Pasadena and the whole Los Angeles basin was mostly thought of as good grazing land. Of which, more in later entries. 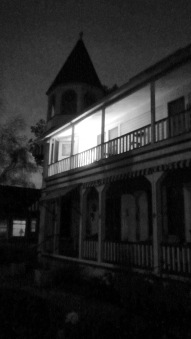 I was asleep while my plane was going over Las Vegas, so the approach to landing in Los Angeles was the first time I enjoyed the lightshow of an American city at night. Most people who get any kind of perspective on LA are struck by how close it seems to the opening titles of Blade Runner. That’s science-fiction, but it ceases to seem very far-fetched after any time in a city where the constellated grids of neon and tungsten spread across the earth, casting a grey and purple glow into a great blank sky illuminated only by the passing comets of airplanes and the shiny silver dollar of the moon. It’s a feeling augmented by the dog-eat-dog techno-futurism of the freeways, where I was heartily glad to have a shuttle driver doing the navigating to my door. It’s a feeling that made it doubly disconcerting when I was dropped off beside a darkened house that looked like something from the cover of a Stephen King novel.

The owner let me in and showed me around the place, which was a Queen Anne house, built in the 1890s and beautifully bought up to date. I cadged myself a room with a balcony, a high wooden headboard to the bed and closet space which would be £500 a month in Central London on its own. This was good, since my jet-lag manifested in under rather than oversleeping, and I spent most of the small hours of the morning reading in bed. 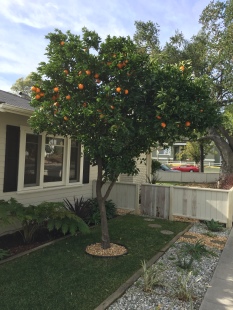 I’ve always loved the morning after a night time arrival, when you finally get to see what the place looks like in daylight. 433 Martelo Avenue didn’t disappoint when I walked out into the new day at 8am. There were the palm trees lining the road whose shadows I’d glimpsed before, and there was the freeway to the south which I’d heard all through the night. There were also rugged, new, exciting mountains to the north of me, and streets and streets and boulevards and avenues of cinematic American suburbia which I wandered through, lost and marvelling. I scrumped an orange from a neighbour’s fruit tree, and it was perfectly ripe and fresh. Further down the road, I took the opportunity of hailing one of Pasadena’s occasional dog-walking pedestrians.

‘I’m sorry to bother you, but this is my first morning in your country, and I wonder if you might direct me to somewhere I can get some breakfast?’

Another ten minutes, and I was sitting down to a bran muffin and a mug of earl grey at Jameson Brown Coffee Roasters on Allen Avenue. It was a good start.